Thirty Eight Days by Len Webster is a romantic fiction. It is the first book in the Thirty Eight Series. The book is just beautiful in its own way as it is perfect in every possible way. 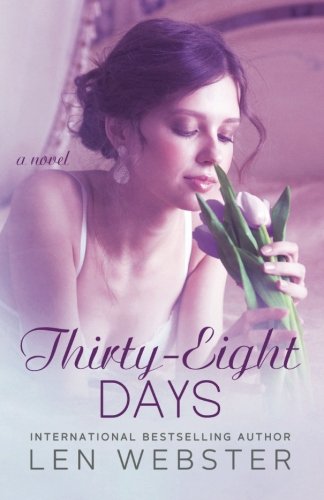 The cover of the book is enthralling. It leaves you in an awe. The cover has a pretty girl who is lost in the fragrance of the flower. The cover surely gives us wonderful vibes. If you are judging the cover then it won’t take you another second to buy this book.

The title is intriguing in itself. Thirty Eight Days keeps us in a confused mode as we are not able to make out like what exactly are these Thirty Eight Days? What the author is going to tell us. These thoughts add curiosity in our minds.

Ask yourself, how many days does it take to fall in love? Nolan Parker and Clara Lawrence never saw eye to eye. In fact, if you asked Clara she would tell you that Nolan hated every thing about her. They never shared any form of connection besides Alex Lawrence. She was Alex’s bratty sister and he was Alex’s best friend, they never stood a chance. Five years have passed and almost 12,000 miles have kept them separated, both living completely different lives. Unchanged perceptions and expectations should have kept them apart but when Nolan returns, the foundations of their ‘relationship’ is sure to change. Their story was meant to end the day Nolan left for Stanford. But what if seeing each other after five years was the game changer? What if this was their one chance to rewrite their relationship or were they always destined to never be more?

The plot is neatly woven and it revolves around Nolan Parker and Clara Lawrence. Both are childhood acquaintances. Clara is the sister of Nolan’s best friend, Alex Lawrence. This is story of their childhood bond which they realize when they meet again after 14 years. Heartbroken Clara finds solace in Nolan. The twists and turns makes this plot more interesting.

The book follows a theme of brother sister relationship where we notice Clara and Alex being the best brother sister. The way ALex pamper his sister, Clara gives us a homely atmosphere. Further, The theme of friendship is really strong in this book. Annie, Josie, Stephie have been fantastic friends to Clara whereas Rob, Alex and Nolan are inseparable. The love theme is the main one which takes away our hearts. Readers instantly fall for Nolan and Clara.

The characterization is the strongest segment in this book. Clara is heartbroken after Darren’s betrayal and Nolan enters her life like a wind. The beauty of Clara and her features are appreciable. Further, Nolan Parker comes back to Melbourne only because of his best friend, Alex who wants him to look after his sister. Alex plays the role of a true supporter and a caring brother blended with a confidante for Nolan.

This book surely gives us the glimpses of life in a Foreign land. The use of descriptions and lifestyle are impeccable. Since the author is from Australia so we can find some native touch. The style of writing is simple, clear and bold. The way the author has used point of views and chapter names with the names of characters, Clara and Noel, is just perfect. The use of wit, humor, drama and thriller part makes it stand out. The end is written in such a way that it can be connected to the next book in the series, Thirty Eight Reasons.

Grab your copies from :

Len Webster is a romance-loving Melbournian with dreams of finding her version of ‘The One.’ She calls Australia home, but secretly wishes a man with a beautiful accent would whisk her away. She’s been called a hopeless romantic and a firm believer of happily ever afters, which she doesn’t object to. Having just completed her Bachelor in Business and Commerce, Len can be found daydreaming of her next Europe adventure or swooning over Mr. Darcy. Her best friends are a hot cup of tea, red velvet cupcakes, a warm jumper and her MacBook, ready to write to her heart’s content.