Turning Back Time by Shravya Gunipudi is a mind bloggling novel or rather say collection of short stories compiled up in a fictional way. The use of involvement of the author in disguise of a character named Alia is fantabulous. This book takes you to the old times where there is no technology, just the stereotypical notions. 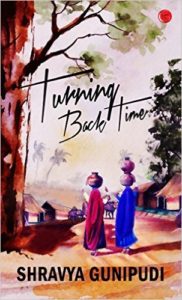 Cover- The cover of the book is mesmerising as it transports you to the old village times which you might have heard from your grandparents. It is surely a beautiful painting which is taken as a cover of the book. The colour scheme is radiant.

Title- The title is crisp, clear and fulfills the purpose of the book and the author, as it gives us an idea that we are going to be taken in flashbacks. The story dances around the title.

Sneak Peek- When people we love pass away, they only take their presence with them. They leave their memories with us. The story revolves around ‘Alia’, an emotionally distant woman, and how the lives of four elderly strangers impact her own very deeply, bringing about a change in the way she treats herself and those around her. As the clock begins to tick and they each start to die, leaving their stories behind for her to learn from, she finds that the depression and trauma caused by their loss have left with her the gift of a lifetime… Realisation. In the tale of life, death and the ride in between, where there are always mistakes and never second chances, there is only one question. Can you make it through without regrets?

Plot- Well, this book does not have a single plot but many plots. It do have a main plot which focus on Alia who works in an old age home. The others are sub plots or can be said separate plots which include life stories of the characters,highlighted in the book. They are on the verge of their death and the way they delineate their stories is the rest of the plot construction.

Theme- The whole book highlights ‘DEATH’ and the way it affects the people around it. For some death is the ultimate destination, for some its the way to get rid of all the sufferings, for some, it is a divine union with their loved one and for some, its a suffering. The author has phantasmagorically shown this concept using different stories in different ways.

Characterisation- Well, the author has beautifully given space to each and every character by giving them their own set of story to tell and made the link, Alia. Alia is a young girl who is bit unsure about marriage as she is attached to old age home and is not able to find out the reason behind her denial as she is attracted to her fiance but is reluctant to accept his love. Her story moves slowly in parts as she is seen busy listening to others’ stories henceforth, her story takes a halt in between.

Style- The author has used picaresque technique of story telling which is almost long lost these days. Not only this, the use of epistolar technique blended with flashbacks makes is more enthralling. The use of first person narrative with a tinge of third person narrative adds flavour to the novel. The next best segment is the use of impersonal as well personal descriptions. The plot construction is surpassable. In simple words, it can be said that,” this piece is a non fiction mixed with fiction”. The book needs a bit of proof reading but it doesn’t overshadow the unique concept of writing style used by the author. This is ‘Perfecto’ as its her debut novel.

Grab your copies from : https://www.pustakmandi.com/Turning-Back-Time-Shravya-Gunipudi

Shravya Gunipudi, a 23 year old CA and CS, has been writing ever since the tender age of nine. Now, more than a decade since her first journey with the pen, she has won numerous prizes for her Articles, Short Stories and Poetry. She was a part of 19 Anthologies with a total of 17 published stories and was recognised as ‘Best Writer of the Year, 2013’ by yourstoryclub.com. She is also the editor of the project ‘The Book of Dreams’, by Numerique Publications.

Shravya wishes to explore her passion both in Finance and Writing. It is her dream to merge her creative side with her analytical one. Writing, she believes, is the best form of expression that calms the mind and frees the soul. Her favourite quote is ‘Either write something worth reading or do something worth writing about’.

Her Debut Novel, ‘Turning Back Time’, is now available in stores!

Royals have a secret, as much as anyone else’s.

17-year-old Cathy Charlotte thought that her mom still keeping a secret about their family. Until one day, odd things are starting to happen—the white hair girl who has been haunted her dreams is coming to reality as their so-called distant relative—Sylvia Elle who acts all strange and mysterious. Meanwhile, everyone in the small town of Bisbee are welcoming a new detective—Chantel Herron who later becomes co-worker to Cathy’s dad.

A sudden circumstance has caused her mom to coma after unknown demons are failed to kidnap her. At that hard time, Sylvia Elle finally reveals herself as a guardian angel who is currently assigned to help her discovering the whole things that her mom has been keeping.

Further, she found out that Chantel is the evil witch with demons works under her command. They want to hunt Cathy for their welfare sake to empower the hidden world of Caecus by experimenting her royal blood. That magical realm is concealed behind an abandoned castle in Austria—where her mom’s family secrecy is also buried in there. Eventually, Cathy is the key to open the door and to save the world.

Keefe R.D is the author of the Salt Prejudice and the Royal Arcanum Series. She graduated from Mercu Buana University and she lives with her family in Indonesia. She loves to spend her time with reading books that mostly about fantasy, supernatural, and spiritual.
Stalk her @
Facebook | WordPress
Go to Book No. 8 >>> Rightfully Wrong Wrongfully Right by Varsha Dixit
#TornadoGiveaway is an initiative of The Book Club. Click on the icon to go to the event page of the Tornado .. Lots of fun awaits you 🙂

THE WITHERING BANYAN by Hyma Goparaju

A well-to-do business family, whose members are torn apart by a turbulent father-son relationship shrouded in mistrust, suspicion, and contempt for one another – a result of the vagaries of the son’s mind and its maladies – suffers silently. Well-wishers fear that Badri is suffering from a mental derangement, and is on the brink of wiping away his father, Siveswara’s hard-earned fame and fortune. Unaware of the boundless periphery of its affliction, descendants of the five-generation lineage are confounded with an enigmatic and stigmatizing battle of their lifetime which they have to decode and overcome in order to ensure the well-being of the ensuing generations.

I am a Management Professional based in Hyderabad. I have done my schooling from KV, NTPC, Ramagundam, college from SDMSMK, Vijayawada and MBA from ITM Warangal. I obtained my CFA charter from ICFAI, Hyderabad and am currently pursuing PhD from IBS Business School, Hyderabad. I have worked with corporates like Reed Business Information, Tata Teleservices and Bharti Airtel Limited and am now associated with my own company. I finally took the plunge to do what I like the most – writing – and ‘The Withering Banyan’ is my first piece of work.

Stalk her @
Facebook | Twitter
Go to Book No. 10 >> The Prince’s Special Bride (Royal Romance Book 1) by Devika Fernando
#TornadoGiveaway is an initiative of The Book Club. Click on the icon to go to the event page of the Tornado .. Lots of fun awaits you 🙂

Love is in the air again…this time it’s steamy, bold and manipulative!

Gayatri and Viraj both are products of childhood trauma. Yet they were able to survive, one because of her shrewdness and the other because of his genius. Rightfully Wrong Wrongfully Right, the final part in the best selling ‘Right and Wrong’ love trilogy is the story of these two damaged souls.

Gayatri Dutta, the poster child for rich spoiled diva is fighting to escape a life of servitude her tyrant father is hell bent on pushing her into. Her past string of failures have her backed against a wall. Lonely and desperate!

Viraj is a con who uses his genius to perpetuate his isolation. His life once of violence and abuse has left him cynical and cold. He shuns the society and its hypocrisies.

And then Gayatri and Viraj cross paths. She needs him and he despises her.

To Viraj, Gayatri, is the epitome of all that he despises, shallow, manipulative and the kind who uses her beauty as a weapon. Or is she?

Gayatri sees Viraj only as a means to an end. She is sure that Viraj with his nerdy demeanor, owlish glasses and crude behavior will be easy to manipulate and walk over. Only he isn’t!

Varsha Dixit, the bestselling author of four successful contemporary romance books. Her debut book, Right Fit Wrong Shoe was a national bestseller for the year 2010. Varsha was a part of the Indian Television Industry and worked as an assistant director and online editor. She considers herself a dreamer who thinks deep but writes light. Even though creativity is gender free,Varsha feels blessed and enriched to be a woman. Currently, with her family, Varsha resides in CA, USA.

Stalk her @
Facebook | Twitter
Go to Book No. 9 >> The Withering Banyan by Hyma Goparaju
#TornadoGiveaway is an initiative of The Book Club. Click on the icon to go to the event page of the Tornado .. Lots of fun awaits you 🙂