The Smitten Husband (Marriages Made in India Book1) by Sundari Venkatraman is a typical Indian tale which highlights the patriarchal society where decision makers are men not women. This is not just a simple tale but there are so many hidden facts about the society.  I got this book in an ebook form as a part of The Book Club blog tour.Lets get into the details:

Cover- The cover of the book is fantastic and matches the story. We can notice a man and a woman dressed up.

Title- The title perfectly matches the theme of the novel and the way the story moves, it makes it apt.

Ram Maheshwari is a successful jewellery designer who has a huge showroom on MI Road, Jaipur. He’s tall, dark, handsome and a billionaire to boot. He’s twenty-nine and falls in with his parents’ wishes when they try to arrange his marriage.

The lovely, stormy-eyed Sapna Purohit is from Pushkar. She’s managed to finish school and makes a living by doing mehendi designs during weddings. She’s always dreamt of a Prince on a white horse, sweeping her off her feet.

One look into Sapna’s grey eyes and Ram is lost. Only, Sapna is unable to see her Prince in Ram. Being from a poor family, she has no choice but to go along with the tide when the Maheshwaris offer to bear all expenses of the wedding.
Does that mean that the feisty Sapna is all set to accept Ram as her husband? She puts forth a condition, after the wedding. Will the smitten husband agree to it?
*MARRIAGES MADE IN INDIA is a five-novella series that revolves around the characters you have met in The Runaway Bridegroom.
Plot- The plot is simple and intruguing without any loopholes. The story revolves around a couple named Sapna and Ram who belong from different corners of the societies. When they come across things didn’t click on both the sides but as the decision is based on man’s verdict, the marriage happens. This is a journey of a non hero who later turns out to be a hero.
Theme- There are many themes in this novel. The main highlight is the male chauvanism society. Sundari maam elucidates that time when Indian men were the bread earners and their decisions were final but we find a bit of twist where the Maheshwari family is ready to accept their daughter- in- law the ways she is. But still when Ram agrees for the wedding inspite of Sapna’s reluctance, this shows us this concept.
Wedding plays a vital role in this novel. Always girl’s are affected if they don’t get a proper match. Hence, here we notice Sapna as a victim of such things and her rejections were due to inability to pay dowry. But in the last case, Ram didn’t ask her any dowry and her parents were pretty impressed by Ram and his family’s thoughts.
Individuality is one such theme. In India, women are mostly deprived of their individualities. Sapna is independent and wants to marry someone who could understand her and has her own picture of a perfect husband but that image she couldn’t find in Ram. She thought after wedding she would lose her individuality but this novel is full of surprises and the way Ram gives her space is impeccable.
Characterisation- The characters are realistic and amazing. I simply loved Sapna who is an independent girl with simple living and high thinking kind of attitude. She belongs to a poor family always lived with respect and dignity. When she comes across Ram, who is not her Prince charming she begins to hate things. She is not happy with the wedding and feels like a curse with this rich man. Later on, things take a positive change and love dwells slowly.
Ram is a rich guy who instantly falls for Sapna and doesn’t want to lose her at any cost. Things get upside down when Sapna reveals that she doesn’t want tobe with him. He gets infuriated and as an audience we do sympathise with him but when we he keeps himself at his wife’s place he realises that he was at a fault. He tries every possible thing to mend the relationship and later on, his hard work is paid off.
Style- I really loved the Indian touch in the novel. The flow of the story was smooth and easy. The sentences were simple, compound and complex. The author has beautifully described the things be it the small house of Sapna or the ravishing environment at Ram’s place. The narrative technique is mind blowing.
My Observations- This story highlights the arrange marriage. According to me, arrange marriages are beautiful as there is alot to know the person. It even takes our entire life to know a person but in love marriage we know everything from the start and that click begins to fade away. In this story, though Sapna wasn’t happy earlier and had a bad opinion about Ram but later on, as she started living with him, spending time with him, she realised that he was not a bad person infact, he is a gem of a person. Sundari maam has beautifully delineated this concept.
Availability- https://www.amazon.in/Smitten-Husband-Marriages-Made-India-ebook/dp/B01I5FRJCI?ie=UTF8&keywords=the%20smitten%20husband%20sundari%20venkatraman&qid=1474385936&ref_=sr_1_1&sr=8-1
https://www.amazon.in/Smitten-Husband-Marriages-Made-India-ebook/dp/B01I5FRJCI?ie=UTF8&keywords=the%20smitten%20husband%20sundari%20venkatraman&qid=1474385936&ref_=sr_1_1&sr=8-1
https://www.goodreads.com/book/show/30759404-the-smitten-husband
About the Author

Even as a kid, Sundari absolutely loved the ‘lived happily ever after’ syndrome as she grew up reading all the fairy tales she could lay her hands on, Phantom comics, Mandrake comics and the like. It was always about good triumphing over evil and a happy end.

Soon, into her teens, Sundari switched her attention from fairy tales to Mills & Boon. While she loved reading both of these, she kept visualising what would have happened if there were similar situations happening in India; to a local hero and heroine. Her imagination took flight and she always lived in a rosy cocoon of romance over the years.

Then came the writing – a true bolt out of the blue! She could never string two sentences together. While her spoken English had always been excellent – thanks to her Grandpa – she couldn’t write to save her life.

All this changed suddenly one fine day in the year 2000. She had just quit her job as a school admin and didn’t know what to do with her life. She was saturated with simply reading books. That’s when she returned home one evening after her walk, took some sheets of paper and began writing. It was like watching a movie that was running in her head – all those years of visualising Indian heroes and heroines needed an outlet and had to be put into words. That’s how her first novel, The Malhotra Bride, took shape. While she felt discouraged when publishing didn’t happen, it was her husband who kept encouraging her not to give up.

In the meanwhile, she landed a job as Copy Editor with Mumbai Mirror. After working there for two years, she moved to the Network 18 Group and worked with two of their websites over the next six years, as Content Editor.

Despite her work schedule, she continued to write novels and then short stories and had them published in her blogs. She also blogs voraciously, writing on many different topics – travel, book reviews, film reviews, restaurant reviews, spirituality, alternative health and more.

Her first eBook Double Jeopardy – a romance novella – was published by Indireads and has been very well received by readers of romance.

In 2014, Sundari self-published The Malhotra Bride (2nd Edition); Meghna; The Runaway Bridegroom; Flaming Sun Collection 1: Happily Ever Afters From India (Box Set) and Matches Made In Heaven (a collection of romantic short stories).

2015 brought yet another opportunity. Readomania came forward to traditionally publish this book – The Madras Affair – a mature romance set in Madras.

THE SECRET OF GOD’S SON
by
Usha Narayanan 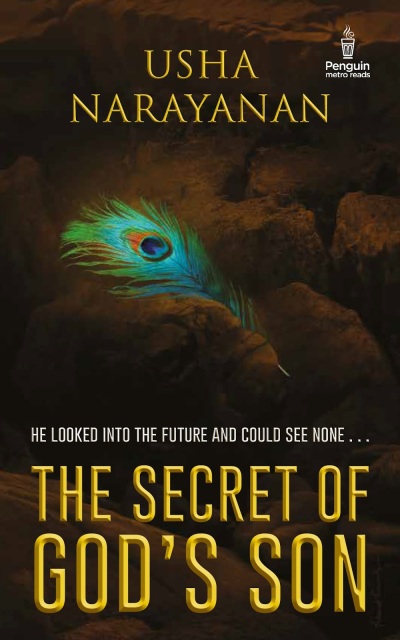 With this cruel curse on Krishna, Queen Gandhari plunges mankind into the unspeakable evil of the Kali Yuga.

It is up to Pradyumna to try and reverse the dire prediction. To journey into terrifying realms, confront Yama and Shiva, and to vanquish the Kali demon. In order to do so, he must shed all that holds a mortal back—his arrogance, his fears, his baser instincts… He must lead his people out of the swirling vortex of greed, disease and misery. And there is one powerful weapon still…the secret surrounding Pradyumna’s origin.
Will he uncover it in time to fight off the cataclysm?
In the answer lies the destiny of all humanity!
Grab your copy @
Amazon.in | Amazon.com | Flipkart

Win the Game of Rafflecopter and win 3 prizes of  Fab India Gift Card worth Rs. 1000 INR 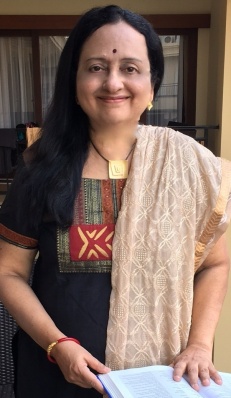 USHA NARAYANAN
Usha Narayanan had a successful career in advertising, radio and corporate communications before becoming a full-time writer. She is the author of The Madras Mangler, a suspense thriller, and Love, Lies and Layoffs, a light-hearted office romance. The Secret of God’s Son is the sequel to her bestselling book, Pradyumna: Son of Krishna, which was published in July 2015.
When she’s not juggling travel, writing and interviews, Usha reads everything from thrillers to romances, provided her cat isn’t fast asleep on her Kindle. She would love to hear from her readers here: author@ushanarayanan.com
You can stalk her @
Website | Facebook | Twitter

Praise for Pradyumna: Son of Krishna:
“Usha Narayanan has taken a quantum leap . . . to the outright spine-tingling narrative from the leaves of a time before. This book is Indian writing coming of age” Femina
“Like the best of our mythological tales, this too, is a multilayered one . . .There is valour, there is cowardice, there is glory, there is shame, there is sex, lies and deception” The Hindu
“This engrossing tale takes readers on a mythological saga” Times of India
This Tour is Hosted by