In Love and Let Free by Jagdish Joghee is the journey of a woman caught in the ties of love, relationships and marriage. The novel is fast paced and their are certain contents which shall be highlighted in the upcoming points: 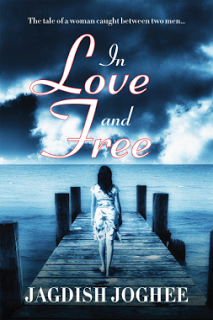 Cover- The cover of the novel is beautiful and has amazing blur colour in it. The cover justifies the story somewhat as we notice a girl whose standing alone.

Title- The title is intriguing and adds lot of curiosity in our minds to open the further pages.

Blurb- Shruti has everything going in her life with great education, incredible romance, a wonderful husband, and two adorable kids. There is plenty of laughter, joy, and love in the cosy nest that Shruti has carefully built.

All is well till that fateful Diwali day when passion gets better of reason. One momentary lapse threatens to uproot the entire foundation of her beautiful life. The stakes are too high as Shruti runs the risk of being abandoned by her husband and loosing her children too.
And there is no one to blame except herself.

Caught in the cesspool of blackmail, ransom, revenge, and remorse, Shruti is on the blink of collapse. She can run but cannot hide …..

Plot- The plot is simple and gripping. This is a story of a woman named, Shruti whose life is going smooth until an event takes place in her wife which changes her life. In short, it is a story of love, lost and found. There is a sub plot where Rahul plans and plot against his wives with his girlfriend which merges with the main plot in the end.

Themes- There are couple of themes which are being talked about. The theme of marriage is the main. It is often noticed that people end up getting married and later on, the spice and love is lost due to other responsibilities. In all this we forget to give time to our spouses. Thus, this situation was faced by Shruti and her husband.

There is another theme that talks about illicit relationships. This takes us back to the Victorian Era where illicit relationships were common and this same happens in this modern world as well. SHruti is unable to find love and satisfaction in her relationship with her husband and her void is filled by Rahul who himself is married. Things get nasty and ashamed Shruti takes some decisions which surely affects her life, firstly for bad and later for good.

The theme of love is definitely a valid one. This is strange, there was love between Shruti and her husband. Did that love vanish when Rahul entered her life? She in seen in a state of tabula rasa where she is unable to decide whether she loves Rahul or not? This seems unclear till the end and later on after the nasty truth being revealed by Rahul, the questions seem to settle.

Characterisation- The characters are artistically portrayed by the author and he deserves a salute. Shruti is perfect in everything be it homemaking, keeping pace with the things, a perfect wife and things get to change after one fine Diwali night where she is seen in an inner turmoil. She takes some steps which makes her pay in the end. She is a round character.

Rahul is the antagonist of the story. He is a typical complex character and his mind games are unpredictable. He is a greedy at heart and a murderer. He gives a lot of trouble to Shruti and her family followed by her second wife. I liked his character as that was the toughest one to portray.

Style- The writing style is simple and use of third person narrative along with informal descriptions is just fine. The story is fast paced which looks like a running story. It feels as if the author is in some hurry. Then there are few typographical errors which makes it bit cliche. The start and the end twist amazing. As compared to his previous book, this book lacks twists and turns. But its not bad for a first timer.

Born and brought up in the beautiful hill town of Coonoor in Nilgiris, Jagdish Joghee has always been attracted to the hills and the forests. Growing up in the midst of serenity, Jagdish had enough inspiration to write short poems during his school days. He now lives in the city of Coimbatore in Tamil Nadu where he works for a leading global information technology services company. Jagdish has worked in some of the top IT companies in India, which required him to travel to some of the major cities in the country and overseas too. His passion for writing started early during his school days. Being a closet writer, Jagdish’s writing was initially confined to journals and scrapbooks. He could not pursue his dream of becoming a journalist when he started working in the IT enabled services industry. Jagdish is an active blogger and writes on issues that have a social impact, apart from reviewing Indian movies. This book marks his foray into fiction. He considers himself more of a story teller than a writer. Jagdish wants to write novels that will keep readers engaged with a good mix of romance, revenge, laughter and thrill. He is also keen to explore the realm of fantasy.

P.S – Also read my review of The Colour of Love : https://captivatingmode.wordpress.com/2016/09/05/book-review-of-the-colour-of-love/