Soulless by MV Kasi is a stream of consciousness novel. The book deals with serious issues like child abuse, drugs, alcohol and depression. Since its a serious issue type book but the author has balanced the seriousness with wit and humour. 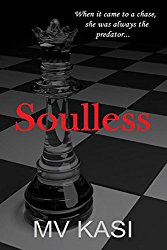 The cover of the book is dark. The chess game gives us a glimpse that it has mystery and suspense in it. At times, it seems unmatchable with the title and the theme of the book.

The title is Soulless which stands for a person who doesn’t care about anyone and their emotions. The title is apt as the protagonist has heartless traits. Still, there are many reasons behind this title which are uncovered as the reading proceeds further.

The format of the book is an ebook. I wish the author could have converted into a paperback, it would have a different essence.

This novel can be categorised in many ways. It is a social novel as the social issues like child abuse, drug addiction, sex addiction, alcohol addiction are concerned. Further, we can call it a psychological novel as it is difficult to deal with Sia’s psychology who seems addicted to many things and the way she behaves. We need to know psychology a bit if we are analysing her character. This can come under young adult or dark romance category as we say many intense love making scenes. Not only this, it can be further categorised a stream if consciousness novel as we come to know about the thought process of various characters.

They say when you take revenge you lose a part of your soul.

But Sia hadn’t felt her soul in a very long time. She only knew the soul-crushing fear and helplessness. Especially during the nights, when she fought an invisible enemy that terrorized her during the nightmares.
Her days weren’t any better either. She spent most of them trying to desperately gain control of her life while battling her various fears and addictions.
She was only twenty three, but she had resigned herself to live the rest of her life that way. Fearing the unknown.

Until it all changed one day…

Now she knew. She knew that the monster from her nightmares was real. And also that her soul had been ripped apart from her.
The memories had brought in fear, rage and pain, along with a strong craving for a swift payback.
But revenge was a dish best served cold. And it required a complete absence of emotion.
So now?
Now she plotted. And she schemed. She prepared herself in every possible way to hunt and destroy her enemy.
But every mission, however well planned can go awry. Sometimes it’s because even though one can be soulless, there is always the heart. A very weak and desperate heart that was being stolen by a man.
A man who was like a bright spark of vivid colors in her otherwise dark and dreary life.
A man…who was only supposed to be collateral damage.

The plot is neatly woven and is really crisp. The story revolves around Sia, who is a mysterious girl with so many secrets in her bag. She has a big motive of revenge which we come to know at the end of the book. The story is written in her voice and at times we hate her and at times we feel sympathetic towards her.

The characters are beautifully delineated. Sia’s character seeks a lot of attention as she is mysterious, bit cranky, rude and soft at the same time. She wants to avenge someone, for which she plans and plots. During this course she comes across a man who changes her life. She is a tormented soul and when things began to heal slowly, her past knocks at the door. The story ends in such a way that it makes a way for the next part. I feel Sia’s portrayal have been the toughest task for the author as she had to create a heartless character who was soft at some point.

The style of writing is simple, lucid and creative. The thirs person narrative along with vivid descriptions makes it poignant. The way the point of views is used, its mind blowing. The author surely confuse our minds at various points. It further has an episolar as well stream of consciousness technique in it. This book can be converted into a movie and I am sure, it will be a hit. There were minor errors in the editing as I could find some missing words, yet the subject matter cannot be ignored. The author has done a tremendous job in highlighting the serious issues which are often ignored.