Sceptical of his twin brother Suraj’s hasty marriage to a complete stranger Ria Nair, has made Suhaan suspicious about his brother’s wife whom he has never met. The fact that the couple adopt a baby immediately after the wedding, only serves to increase his antagonism.

Who is this Ria, and why did she marry his brother?

Suraj dies, forcing Suhaan to return to the homestead to take over the family business. That’s when the inevitable happens – he comes face to face with his brother’s widow and discovers that he is attracted to her.

On one level, Ria is all innocence and vulnerability. On another, is her mysterious and hurried marriage to his brother. She could be a gold digger.

Is his attraction for her mere lust – or could it be… love? 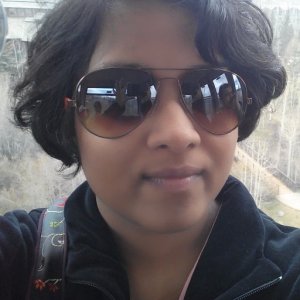 Here is a passionate romantic who loves literature and has created many happy ending in her imagination, for every movie or book with a sad conclusion.

She soon began to create her own characters and situations, creating plenty of romances and happy endings to satisfy her imagination. “But for my laziness and diffidence,” says Reshma “I would have penned umpteen stories of unexpected pairs meeting and falling in love, overcoming troubles and hurdles to unite for a lifetime.”

A voracious reader, Reshma is a poet as well, and feels that she would be blessed as a writer if she could bring a happy content sigh on the readers lips.

ADD YOUR INLINKZ BY CLICKING HERE