Love Forever @Rajpath by Kalpana Mishra is a perfect instance of Domestic Novel as most of the Sindhi as well as Bihari society is highlighted. Further, it is a beautiful tale of Shalini and Kartik who happen to meet at the most boring place. But, it is said love has no proper place to bloom, it just happen. Henceforth, this love story takes place at a Government Office. 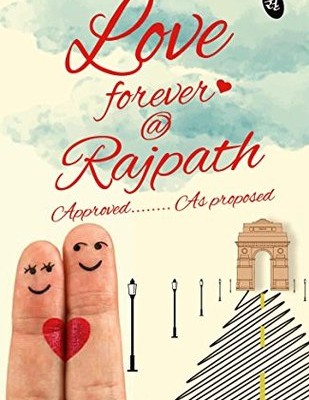 Cover- The cover of the book is mind blowing and romantic can be better said. The colour scheme is peaceful and somewhere or the other it has the picture of a monument which happens to be in Delhi.

Title- Honestly speaking, the title is bit diverging if you just see there but when you start reading it and come at a page where the literal meaning is delineated, it doesnt look diverging then. It is an apt title.

Plot- The plot is intriguing and revolves around the lives of Shalini and KArtik who are government employees. The way they fell for each other and how they convince their families and fulfill their dreams is rest of the story.

Two Communities- This novel covers Sindhi society and Bihari society. The female protagonist, Kalpana belongs to Sindhi community whose family is open minded and has no problems in choosing the partner while on the other hand, Kartik belongs to a conservative society who are staunch followers of caste system and love marriage is considered as a sin in their community. They are rigid about women clothes and are very traditional. So both Shalini and KArtik leave no stone unturned to convince thier families.

Zabaria Shadi- This book has highlighted a concept which is unknown to most of the people and only Biharis are acquainted with this. Zabaria Shadi is a type of marriage in which the groom is forced to marry the girl for which he is beaten, abducted and if something serious happens, he is killed. The author has done a thorough research about it.

Picture of Woman- The author has given us two aspects about women which are both opposite to each other. Firstly, Shalini works at a place where she is the only woman working there and one other woman in the other section. This shows that woman is being accepted everywhere and there is no difference between man and woman. Further, when Shalini went on a trip she was with men and everyone made her feel comfortable, atleast tried their best especially Swami Sir who took extra care of her.

The next incident is totally opposite as when they were travelling, they noticed that there were no women urinals which created a lot of problem for Shalini, for which she had to sneak in someone’s house.

I even noticed that women are judged everywhere. When Shalini was frank Kartik’s friend told him that Delhi girls use guys and throw them after sometime. If any misunderstanding takes place his judgement starts. The auhor through these incidents wants to give both the sides of the coin and it is well interpreted.

Dowry- Though dowry was not completely involved but talks about it were always there. Kartik was against it while his family strongly believed it. Whereas Shalini and her family was against it. This Zabaria Shadi episode took place because of this thing only.

Characterisation- The author has beautifully portrayed the characters. Shalini is an extrovert who is free to make her decisions. he loves her family and in return they also respect her independence and decisions. Whereas, Kartik is an introvert and takes a lot of time to express his thoughts. His family is conservative and staunch believers of caste system, Dowry and customs.

STyle- THe book is written in a simple, lucid language which is easy to comprehend. There are certain lines which makes us laugh while some makes cry. The book is written in omnicient narrative. The descriptions are  well written and explained. One can visualise the situations. There were minute typo errors which can be easily corrected but the heavy issues discussed here surpasses this.

Grab your copies from http://www.amazon.in/Love-Forever-Rajpath-Kalpana-Mishra/dp/9382665641

Kalpana Mishra is a Deputy Director in the Government of India. She’s also a visiting faculty to a number of government institutes, schools, colleges and universities, spreading awareness about various issues like gender sensitisation at work place, other gender issues, communication skills, etc. She’s a contributor reviewer and blogger on various blogging sites and her short stories, poems and articles have been published in leading publications. Her varied interests include acting, writing, voicing and sports. She stays in Delhi with her husband and two kids.