Well, I got this book from Authors Paradise. Arjun Without A Doubt is a mythology that has tinge of suspense and spirituality in it. This book takes us back to Mahabharata times where the characters do the talking and killing. We all are acquainted with Mahabharata which is the biggest known epic and many other versions have been written about it. This book is one such version which highlights the struggles of Arjun. For this book, the main protagonist is Arjun.

Cover- The cover of the b0ok has colourful schemes which makes it look fascinating. Actually speaking, The cover has Lord Krishna’s Mor Pankh which makes the readers interested in reading the book.

Title- Arjun Without A Doubt is the title of the book which clearly tells us that the story would highlight Arjun and his struggles.

‘I knew there was nothing poetic about death. I knew not that the most horrific battles are fought off the battlefield.’

Arjun: The idealist in a non-ideal world, the warrior whose deadliest opponent was his conscience. History forgot his voice, but misquoted his silence.

‘My self esteem originates from me and ends in me. Why does your honor depend on me? Find your own.’

Draupadi: The untamed tigress, the fragrant flame, the unbridled spirit.

‘Power does not justify sin. Power is not virtue. Virtue is that which lasts in spite of power.’

Krishn: The enigma whose unique ideology churned the battlefield into a quest for truth.

The Missile… The Trajectory… The Vision…
The trio that makes for the core of the Mahabharata.
This is their saga. Insightful, visceral and candid.
Plot- The plot construction by the author is amazing as it highlights the two protagonists Arjun and Draupadi who have enough to handle on their plates still they stand together. Though Draupadi is married to Arjun’s other brother yet there is a special bond between the two. Draupadi always had a special corner for Arjun. It also gives us an insight about their dear friend, Krishn who guides them at every step. Krishn is the almighty who is the mouthpiece of author.
The greatest epic ‘ Mahabharta’ – This book is inspired by Mahabharta which is the largest epic just like Ramayana. Very few people know the hidden story behind it. It is said Maharishi Ved Vyas wrote it but the truth is, he was blind so took help of Ganesha who agreed to write it only if he recited it continuously. The saga records the facts and events of the 12 day war between Kauravas and PAndavas in Kurukshetra. The saga is written in poetic form and has used blank verse. There shlokas which are written in Sanskrit and is known as the longest poem ever written.
( Source: https://en.wikipedia.org/wiki/Mahabharata)
Characterization- It is hard to decide who was the protagonist in Mahabharta as all have their own stories to tell. All were bounded by their own issues and curses. But when we read this book we can clearly make out that in this book Arjun is the mouthpiece of the author. The story is written in his context hence, his point of view is highlighted. He is a warrior and has all the traits of an ideal soldier.
On the other hand, Draupadi is a princess who is born out of fire and is a flat character. She is beautiful and the counterpart of Arjun. The author has beautifully delineated their characters and the pain, suffering is shown fantastically.
Style-The book is mixture of third person narrative and a dialogic form. The author has used varieties of sentences. The emotions and descriptions are perfectly written. There are no digressions in between. The name of the chapters are intriguing. for instance : The Cacophony of the Dead, The Womb of a Butterfly and my favourite, Tears Reversed. The author has used rich vocabulary which serves as an icing on the cake.  the chapters are short which becomes a quick read inspite of the length of the novel. There is use of italiced words or sentences to grab our attention. I really loved the Whys and Whys not : Exploring Myths.
Lows- There were not spoilers as such, just the minors which my eyes got hold of them. There were some typo errors, mismatch of dialogue or rather positioning of dialogues and the spacing issues which could have been avoided. But for me, The book stands out. It is worth reading and I am falling in love with Mythology again.
Availability of the book – http://www.amazon.in/Arjun-Without-Dr-Shinde-Sweety/dp/9381836973/ref=sr_1_2_twi_pap_1?ie=UTF8&qid=1467199819&sr=8-2&keywords=arjun
Others Reviews- http://aliveshadow.blogspot.in/2016/06/book-review-arjun-without-doubt-by-dr.html?spref=fb
https://webookreviews.wordpress.com/2016/04/12/book-review-arjun-without-a-doubt-by-dr-sweety-shinde/
http://www.expressinglife.in/2015/04/book-review-arjun-without-doubt-by-dr.html
About the Author 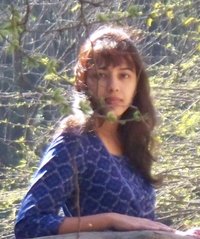 The heart can be dissected, the brain can be spliced open, but I love to unravel the mind and emotions.

Dr. Shinde Sweety holds a Doctorate in Medicine.
Avid Mahabharata fan. Voracious reader.
Yoga enthusiast, Student of Spanish and yearns to learn Sanskrit.
Skilled at pencil sketch. Loves to daydream and swim – but preferably not together!
Curious about the Mystic & Mystique. Insane about soulful music.
Content to be cocooned in a dream world.