The Indian Tycoon’s Marriage Deal by Adite Banerjie is a Mills and Boons saga which will keep you glued till the end. The book highlights the motive of revenge, marriage, betrayal and love. 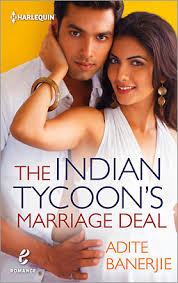 Cover- The cover like other Mills and Boons is fabulous and includes an image of intimacy which is required of it.

Title- The title is straight to the point and the whole story’s theme is delineated in this. It gives us a clear cut idea about the motive of the author.

Plot- The plot is gripping and revolves around Krish is the son of a tycoon and he is trying to avoid the marriage which is based on a business deal.Maya is a landscape gardener whose father became an alcoholic after he lost his job and his wife (Maya’s mother) was killed. She holds Krish’s father responsible, although Krish doesn’t know any of this.

Life takes a turn when opportunist Maya comes across Krish and in the party he asks her to marry her. They both have their purposes for which they agree to marry. BUt destiny has some other plans for them.

Theme- The story revolves around revenge motive. This is the evident theme in the novel where Maya wants to avenge the murderer of her mother and her father’s bad state. She hates Krish and her father to the core of her heart for which she agrees to marry Krish.

The theme of love can also be noticed as the way Maya and Krish click each other is mind blowing. They have a connection but both deny till the end.

Characterisation- The most impressive part about the authoris the way she has portrayed her characters. Maya is an interesting character who has solution for everything be it her work or anything else. SHe is a multitasker and teh way she handles her life is impeccable but she carries a grief and hatred in her heart. When she comes to know that Krish is her enemy’s son, she accepts his offer and tried to avenge him but soon destiny plays its role and things change forever. Whereas Krish is opposite his father who doesn’t approve his decisions but he has to obey him because of the boundations. The way he comes across Maya and asks her to marry him is wierd but when she agrees to it, sounds more wierd. He is money minded but deeply attached to his mother.

Style- The style of writing is simple, lucid and has brevity in it. The way the author has used descriptions be it of a landscape, house or anything, are just impressive. The use of third person narrative and use of epistolar technique in between is enthralling. The editing is also fine but the story seems predictable and might be a hinderance if anyone guesses it before. Overall, it is a contemporary romance challenging the old notions of novel writing.

You can grab your copies from :http://www.amazon.com/gp/search?keywords=Aditie%20Banerjie%20The%20Indian%20Tycoon%27s%20Marriage%20Deal&index=books&linkCode=qs&tag=dearauthorcom-20

Adite Banerjie discovered the wonderful world of books at an early age which sparked her interest in writing. After a fulfilling and exciting career as a business journalist she turned her attention to fiction.

Her latest book is a romantic-thriller, No Safe Zone, published by Harper Collins India. She has penned two books for Mills & Boon (The Indian Tycoon’s Marriage Deal and Trouble Has a New Name) and written several screenplays.

When she is not grappling with her current work-in-progress, she enjoys spending time with her husband, spoiling their Irish Setter silly and watching back-to-back movies.

She loves to connect with her readers. You can find her on Facebook (https://facebook.com/AditeBanerjieWriter) and Twitter (http://twitter.com/adite)

Also Read the review of NO Safe Zone: https://captivatingmode.wordpress.com/2016/09/07/book-review-of-no-safe-zone/